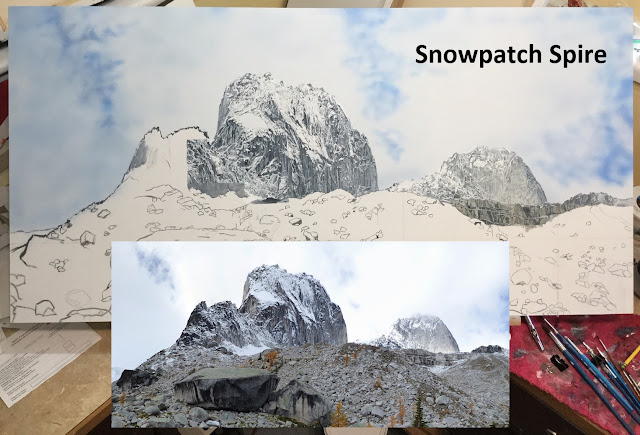 The Bugaboos
This autumn I hiked to the Conrad Kain hut in the Bugaboo Provincial Park.
It was a fantastic day with great company. The larch had turned to a golden hue
and the spires looked magnificent, as always. I photographed the Snowpatch spire
from the Conrad Kain hut and felt that I needed to paint it.
Sometimes intuition is the deciding factor on
subject matter for my art work.
(Conrad Kain was an Austrian mountaineer who came to Canada in 1909
to work as the Alpine Club of Canada's first official mountain guide.)

*I have since learned that as a young boy, my Grandfather, Gil Cartwright,
would chop firewood for Conrad Kain at his home in Wilmer, B.C.

And so began my fascination with Conrad Kain.

Since I began this painting, I found myself having dinner with a woman who has
climbed each of the peaks in the Bugaboos EXCEPT for Snowpatch.
She explained that she had only made it halfway up the peak before inclement
weather forced her to propel back to the bottom.

I have decided to paint the image of Conrad Kain into some of the rocks in
my painting. I have also found a formation that appears naturally in the snow
on the spire and looks like a capital 'K'.
So, I have also decided to hide Conrad Kain's initials in my work as well.

Stay tuned for further progress. I am curious to see how easy or hard
it will be for people to find the hidden elements in my finished piece.
Posted by Leslie Cartwright at 21:28