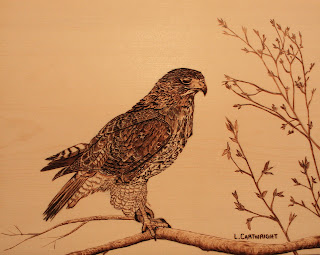 Years ago my grandmother gave me a wood burning tool
that had belonged to my grandfather. Recently, I created this
8 x 10 panel that shows a red tailed hawk perched on a tree
branch. I plan to frame and display it at Pynelogs during the
Headwaters Art Society's show in May. The exhibit will take
place from May 14th to May 28th, 2013. The reception is being
held on Friday, May 17th, 2013.
Hope to see you there!
﻿
Posted by Leslie Cartwright at 14:02 No comments:

SENTINELS AT SUNSET
The following video shows the progression of a painting
that I have just completed. Fisher Peak and the Steeples
are formidable snow covered summits highlighted against
a beautiful vista of purple and pink clouds at sunset.

Posted by Leslie Cartwright at 18:33 2 comments: 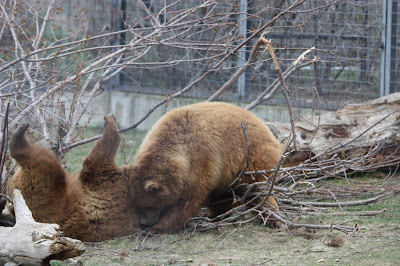 This weekend my husband and I enjoyed the antics of two
young grizzly bears at the Wildlife Park in Kamloops, B.C.
The park is home to many different species of animals that
are native to the province of B.C. Some have been orphaned
or have been injured and rehabilitated but are unable to be
released into the wild again.
While there were other animals that we enjoyed seeing,
none were as entertaining as this rambunctious pair of bears.
The siblings gave me plenty of opportunities to photograph them
at play and at rest. Below is one of the resident Bald Eagles
who has suffered a broken wing.
It was a great place to collect reference material for my paintings. 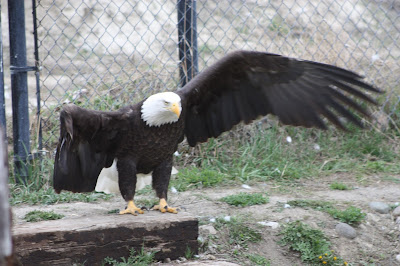 Posted by Leslie Cartwright at 19:49 No comments: 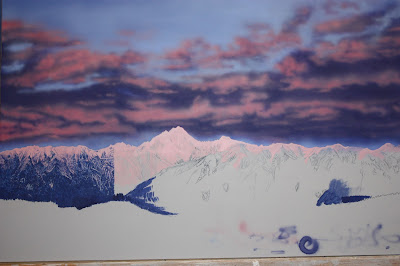 I have been painstakingly adding the slightest details to the
mountain range that I am currently painting. I refer to the pain because
last week I broke my middle finger and cut the tip of my pointer finger
on my right hand. My bruised and sore fingers have developed shades
of blues/purples and pinks that would rival the colours of this sunset. :)
How I wish I was ambidextrous!
Needless to say, it has been challenging.
Cheers!﻿
Posted by Leslie Cartwright at 07:41 No comments: